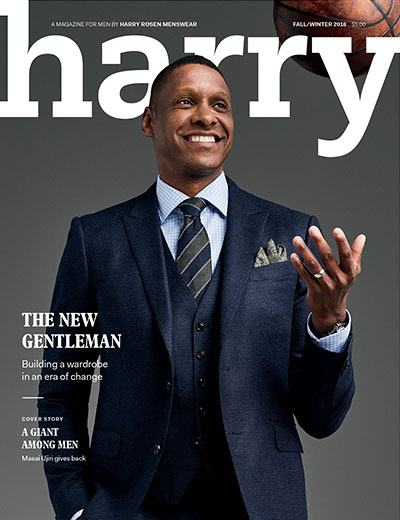 This cover story for Harry Rosen’s client magazine, Harry, weaves together a personal history of Toronto Raptors President Masai Ujiri with his charity work in Africa and longtime connection to Harry Rosen. I wrote this story as the Raptors finished an unsuccessful playoff run in May 2018; it would take another year for Ujiri’s work to be rewarded with an NBA championship.

A Giant Among Men

“I’m sorry. I know it bores you guys.” Masai Ujiri has no big announcements to make. It’s spring 2018, the third postseason press conference like this. The Toronto Raptors have followed another strong season with a deflating playoff exit too early in May. To each question about coaching, trades, superstar players, the Eastern Conference, and rival teams, the Raptors’ president gives a persistent response, an echo the reporters have heard each year: “I’ll evaluate everything over the summer.” Ujiri shifts in his seat like he wants to roll his sleeves and get started. “Now is the time I can work.”

The work of the summer isn’t all for the Raptors. It takes Ujiri back to Nigeria, where he grew up, and back to the youth basketball camps organized by Giants of Africa, the foundation he started in 2003. For four days at a time, up to 100 teenagers will eat together, bunk together, write team chants, and learn basketball fundamentals. The camps run in succession, six or so each August, at least one in Nigeria and the rest across Africa. “The travel gets hectic, and we’re dealing with different federations and people with their own agendas. I’m going eight in the morning till seven at night,” Ujiri says. “I love it.”

Most kids will arrive the evening before camp starts. The boys (it is mostly boys, although GOA has run camps for female players too) are young enough that they see only one possible basketball career—playing—and they all believe they’re on that path. Ujiri recognizes the look, because he was once the same. “They don’t think of doing other things,” Ujiri says. “Not yet. But we can’t all play in the NBA. There’s sports law, sports psychology, sports journalism. There are administrators, physiotherapists and trainers.”

Ujiri himself had a modest career on the court, first in US college ball and then for six years as a journeyman in European leagues. It was in Belgium, where he was playing, or maybe in Spain, where his childhood friend Godwin Owinje was playing, that the idea for Giants of Africa began to form. Two guys, in their late 20s, hanging out on weekends and talking about next moves. How to maintain a career in basketball, even as their options as players were narrowing? How to do something significant back home and promote basketball in a continent where soccer dominates?

After the last team he played for, in Denmark, folded before Ujiri could cash a paycheque, he ended up sharing a small apartment with Owinje in the suburbs of Washington, DC. He’d been learning as much as he could about front-office operations in basketball, and he began networking hard, attending college games and basketball camps. As his contact list expanded, he started to meet the right people. In 2002, John Gabriel of the Orlando Magic gave him work as an unpaid scout.

Harry Ezinibe, 6’1″ and 15 years old, gets on a Lagos-bound overnight bus. He’s travelling from Kano, Nigeria’s second largest city, historically the southern terminus of Saharan trade and, occasionally, a target for Boko Haram extremists. In about two hours, the bus will pass through Zaria, the city where Ujiri and Owinje began playing on the outdoor courts of the local university. Ezinibe has been playing basketball for a couple of years, first in imitation of his two older brothers and now with a local outreach program that sends a basketball team into areas affected by conflict. The team plays against local kids while spreading health information. The team also competes in national tournaments and enrolls a few promising players in the Giants of Africa basketball camp.

Everyone in Kano knows the highway is dangerous, especially at night. It’s a risk that everyone accepts, but this particular trip was “one of the worst,” says Ezinibe later. “Buses were being shot at. Ours pulled off the road to wait, but we could still hear gunshots. The highway robbers don’t care who’s on the bus. They really don’t care about some kid heading down to a basketball camp.” He heard later that other players were on buses that had windows shattered or passengers wounded. “Some buses stop, others just drive. If they get through, they’re the lucky ones.”

That was almost 13 years ago. After the GOA camp, basketball took Ezinibe to Saint Mary’s University in Halifax and to the front office of the Raptors 905, the NBA team’s minor league affiliate. In 2017, he returned to a Giants of Africa camp as a coach. “The kids see someone who really is just like they are,” he says. “And the other coaches can talk to me about the kids.” That player who seems shy, he suggests, may just be thinking about what could happen on the bus trip home.

When Ujiri and Owinje brought 25 or so young players to Ahmadu Bello University in Zaria, in December 2003, their first-year goals were straightforward—teach basketball fundamentals and help young people. “I was just becoming a scout then,” says Ujiri, “so there was also this intrigue of maybe finding the next giant, the next great player.”

Owinje was working in a law office, and Ujiri had his first paid NBA gig as a scout for Denver, but “we didn’t have much money, so we scratched and scratched. It was crazy,” says Owinje. Ujiri collected old shoes from the Denver players; Owinje knew some college coaches and got more shoes from them. They had uniforms made cheaply in Nigeria. Another childhood friend, Mike Akuboh, working as an assistant coach at Ahmadu Bello, helped get them access to the courts.

“The first years were the hardest,” according to Owinje. “As Masai rose in scouting, it became easier.” The organization’s goals expanded over time too. “Growing up, we had no support in Africa to play sports. Parents didn’t see sports as valuable.” Raising the profile of basketball and bringing successful Africans back to the camps would start to change that view. And it would start kids playing at a younger age, so the ones with natural talent could develop court skills before they became too old to attract a college scout’s attention.

The players in the camps may be tall enough that they look like men, but they fumble socially as much as any other teenagers. Some don’t make eye contact when they talk to adults; others haven’t figured out that they must be ready for practice on time. The camps have developed a subtle life-skills curriculum—time management, networking, confidence, leadership, persistence—along with the basketball drills. It was those skills, more than his record as a player, that propelled Ujiri’s NBA career. No surprise that he wants to pass those on.

“One of the best things we do is divide them into groups and challenge them to create a team chant,” says Ujiri. It brings the shy kids out, helps everyone communicate on the court, and coheres strangers into a team. “I don’t want to call it a transformation,” he says, “but all of them are opening up.”

Ujiri, too, changes when he’s back in Africa. He describes himself as more relaxed, more at home. Ezinibe notices something else. “In Toronto, he’s always very cool, very professional. In the camp, he gets angry more easily.” Ezinibe is talking about his boss, really, so he quickly clarifies. “It’s a positive anger. It’s passion.”

At the postseason press conference this May, a little anger is there, though well tamped down by professionalism. It shows in Ujiri’s annoyance at social media memes that troll the city as “LeBronto,” a reference to the team’s nemesis, LeBron James. He can handle criticism—“Put it on me”—but he doesn’t like cheap shots aimed at the place where his children were born. It shows in his impatient answers to the jabs from local media that cheered the Raptors until their last few games. He could be describing his work in Africa. “If they want us to break this thing and start over, no. We’re not doing that here,” he says. “We are finding young players who are going to grow and going to win.”

“He values our input, but he knows what he wants.” Jason Green, managing director of Harry Rosen’s Bloor Street location in Toronto, is describing Masai Ujiri’s preferences: “Slightly shorter, European-style jackets and tapered pants. He’s very tactile, and he goes for fluidity and a natural silhouette, not a sartorial, authoritative look.” Zegna and Kiton, says Green, not Tom Ford.

Green has known Ujiri for five years or so. “What he’s doing with Giants of Africa strikes me personally,” says Green. “More leaders in our society should attach themselves to outstanding endeavours like that.” At a GOA event last year, the two men were chatting about the organization’s 15th anniversary and the centenary of Nelson Mandela’s birth, both coming in 2018. Green suggested a partnership of some kind with Harry Rosen, “Something meaningful we could do for Masai and Giants.”

Ujiri often talks about being transfixed by television news coverage of South Africa’s Soweto riots in the mid-’70s and becoming aware of Mandela through the ’80s, as anti-apartheid activism grew. “I began to study him more—his story, his journey and his experiences. It was inspiring.”

Mandela, who was a boxer in his youth, understood the power of sports to unify and transform communities and to break down racial boundaries. At the 1995 Rugby World Cup final in Johannesburg, a year into his presidency, Mandela came onto the field wearing a green Springboks jersey. His risky move—the team was much hated by black South Africans as a symbol of apartheid—helped bring the country together, for that moment at least, through a very public demonstration of generosity and forgiveness.

To celebrate Mandela and support Giants of Africa, Harry Rosen is launching a fundraising T-shirt line under Mandela’s clan name, a term of high respect: “Madiba.” The shirts will be available in Harry Rosen stores. On each shirt’s tag, there’s a grainy photo of the young, muscular Mandela, fists up but eyes slightly down, in boxing stance. He looks determined, yet a little unsure of himself. He looks like one of the kids at a Giants of Africa camp.

Like what you see? Let’s get started on your project.