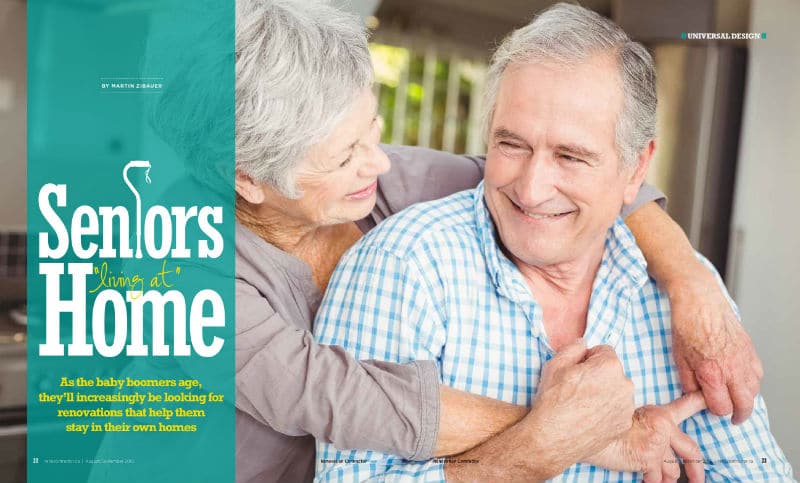 This feature story introduced contractors to an underserved market: seniors who renovate to stay longer in their own homes.

Carla Berezowksi had just been turned down for a lunch date—by her own mother, who wouldn’t join her because she hadn’t had a shower yet. “Why can’t you just jump in the shower right now?” asked Berezowski, who hadn’t realized that her mother, who occasionally feels dizzy, only used the shower when Berezowski’s father was home. She was also surprised that her mother hadn’t asked for renovation help; “After all, I am in the business,” she says. After giving it some thought, Berezowski made another offer, this time to apply non-slip coating to the shower floor, install a grab bar that looks like a towel rack, and pick up a portable phone that her mother can bring into the bathroom. “Now, Mom has her independence back.”

“Aging-in-place” renovations, even the simple changes that Berezowksi made, help seniors live in their own homes safely, independently, and comfortably. Such modifications usually follow the principles of universal design, the belief that the built environment should be useable by everyone, regardless of age, ability, or status. It’s a niche market that Berezoski, president of Aging in Place Calgary, has been working in since 2008, when a couple of clients asked for accessible renovations. She saw a larger business opportunity. Needing to learn more, she went to the U.S. to get a Certified Aging in Place Specialist (CAPS) designation from the National Association of Home Builders.

The market Berezowski identified has much potential for contractors. According to a 2013 poll for RBC, 83% of Canadian baby boomers want to remain in their own homes as long as they can. “The baby boom really didn’t get going until about 1951. That leading edge is just retiring now,” says Russell Mathew, a Toronto-based planning consultant specializing in demographics. The peak year for births in Canada was 1959. If those 57-year-old boomers don’t need aging-in-place renovations now, they’ll soon be thinking about them. And they have the money to do it, says Mathew. “There are exceptions, but generally boomers have done well. They’ve worked all their lives, in a pretty good economy, and they have a lot more savings than the previous generation.” He suggests that the market for aging-in-place renos may be stronger in smaller cities, where “there’s a smaller selection of apartments and other options to move into, and those choices are not seen as desirable.”

Take Ted and Donna Pearce of St. Thomas, Ont. An active working couple, just past 60, they’ve recently moved from a house built in the 1980s to a new house on a much smaller lot. “We’re hoping to get another 25-plus years on the right side of the dirt,” says Ted. “We need a house that will work into our eighties.” Collaborating closely with their builder, Don West Homes, they chose a layout that keeps “every essential for everyday living, including laundry, on one floor,” Pearce says. “That was important to us.” Before moving, a knee injury reminded him why: “Every time I used the stairs, I thought about what life would be like if this pain were permanent.” Choosing a small lot, with landscaping that will require little upkeep in the future, is also part of the Pearces’ long-term strategy; reducing maintenance is another aging-in-place principle.

For renovators, aging in place means thinking ahead—knowing what features can be built now to prepare for the future. Adding grab bars, as Berezowski did, is much easier if the blocking is already in the walls. Although building codes don’t require blocking in every bathroom renovation, it’s a value-added upgrade that contractors should suggest, says Moneca Kaiser, owner of Moneca Kaiser Design Build in Ottawa. But before the wall is closed, she warns, “Take a picture of the blocking and give your clients a map. They’ll forget where it is.”

Kaiser encourages clients to plan for future one-floor living, whether it’s a new build—“where you can incorporate universal design seamlessly”—or a renovation. As well as including a main-floor bathroom, “I try to design a dining room or family room that can easily be closed off, maybe with large French doors, to become a bedroom if needed.” She also considers where a caregiver could live, perhaps on the second floor, in a converted basement family room, or in a bachelor apartment.

Building in such flexibility helps a space adapt to future needs, especially in the workhorse of the house, the kitchen. “You can stage a kitchen design so it works now for a 40-year-old and yet someone like my mom, who has arthritis, can use it comfortably too,” says Berezowski. “Then as the owner ages, take out one section of cabinets and put in a shorter counter there.” Lower or adjustable-height work surfaces can be used by someone who’s seated.

To accommodate wheelchairs, aging-in-place principles call for 36″ hallways and doors, a tough requirement to meet in older homes. (Swing-clear hinges can sometimes add enough clearance to a narrower door.) Widening doorways and halls can be a major renovation. “Think of the entryway,” says Berezowski. “You have to break through the wall, add a wider header, close in the walls, and repair the exterior finish. It adds up.” Sometimes, converting a window into an entry is a better, more cost-effective solution. An alternative to widening interior halls and doors is removing them entirely—open concept can be more senior friendly. But, says Berezowski, “In older, inner-city homes with narrow hallways, lots of walls and segregated rooms, unless someone is really set on staying, opening up those places can be prohibitively expensive.”

On the upper end of aging-in-place costs are residential elevators, which can easily top $30,000, says Richard Speare, a contractor in Barrie, Ont., who specializes in renovations for accessibility. This isn’t a common renovation; he’s only worked on three or four over the past 20 years. “We do the carpentry, but partner with an elevator company to install the equipment.” And clients without an immediate need for an elevator rarely plan for one down the road. “I’ve only built one shaft in anticipation of future use,“ he says, “for someone with a medical condition that will probably deteriorate over time.”

Unless we start renovating existing housing stock now, Kaiser suggests, we may face a new housing crisis, where aging baby boomers simply don’t have enough places to live comfortably and safely. Should more aging-in-place and universal design concepts be mandated in the building code? “Then we’ll just get a lot of stupid universal design,” says Kaiser. “These changes are always better if they’re consumer-driven. We need more consumer education.” Speare, too, points out that modifications often need to be tailored to the homeowner. Grab-bar blocking installed now, according to requirements in code, may not be in the right position when it’s needed years later—one reason he’s a fan of Moen’s mounting system, which can be securely installed even where there’s no blocking. “There are typical places for grab bars,” he says, “but they’re not always the right places.”

Knowing exactly where the grab bars should go takes more than a code diagram or even common sense. The CAPS training program that jumpstarted Berezowski’s business is a three-day course, costing about $1,500, and covers topics such as needs assessments, design solutions, and marketing strategies for aging-in-place services. The course also includes hands-on learning: each participant is asked to hold a tennis ball, cover the hand with a sock and try to open a door. This exercise simulates the experience of someone with rheumatoid arthritis. Currently, Berezowski is the only recognized CAPS trainer in Canada. She offers the course in Calgary, but will also travel to deliver the training to groups.

For Speare, aging-in-place training took a less formal route—experience and observation. He frequently works with occupational therapists, who analyze their clients’ needs and plan adaptive renovations. “After a while, you know what they’re going to suggest,” he says.

“You have to listen to and observe older clients,” says Berezowksi. “And you have to take time. They want someone they can talk to and trust.” As part of assessing what seniors need, she often asks clients to make her a cup of tea. Then she can watch them manoeuvre in their homes. “I often see clients who ‘furniture surf,’ meaning they steady themselves on furniture as they walk by.” It’s a sign they may need non-slip flooring, instead of soft, plush carpets, and better footwear.

Although homeowners should be planning ahead, most aging-in-place renovations are still reactive. Berezowksi says she’ll get a call from an adult child after a parent has been hospitalized or from a senior whose doctor has suggested grab bars. Younger clients and active seniors, on the other hand, start with other renovation goals and may balk when contractors suggests anything that signals “accessibility.”

“I can convince them they should install the blocking, but not the actual grab bars,” says Kaiser. “They’re in denial. Everything in society tells us we’re immortal.” She has more success if she puts the issue in terms clients can relate to: “If you break a leg, which can happen at any age, you’ll really appreciate a bathroom and a room you can use as a bedroom on the main floor.” The bachelor apartment that may eventually house a live-in caregiver is more appealing to younger homeowners if it’s presented as a way to help pay the mortgage.

“Seniors sometimes resist aging-in-place renovations because they think it shows they’re losing their independence,” says Berezowksi, circling back to her experience with her mother. “But, in fact, we’re giving them more independence.”

Like what you see? Let’s get started on your project.